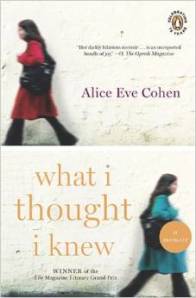 This book was reviewed as “darkly hilarious… an unexpected bundle of joy” by the Oprah magazine.  I was less than impressed.  It told true story of the author, divorced and in a relationship with a new, younger partner and her adopted daughter.  Despite a past diagnosis of infertility, she became pregnant and, unbelievably, did not realize it (despite multiple doctor’s visits) until the 6 month mark.   The book vividly describes her experience but it was very hard to warm to this mother who was VERY negative about the entire experience.  She struggled emotionally, contemplating late term abortion and adoption.  The baby was born with health challenges that stressed the little family further.  As I finished this book, I could only hope that the daughter NEVER reads this book as I think she would be devastated to hear her mother’s true feelings during this stressful time.  I always shudder when I hear children referenced as “accidents” or “mistakes” but this descriptive story would be more upsetting to a child.  I feel very unsettled after reading this book.