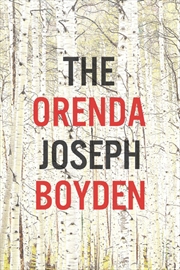 After enjoying Three Day Road, I thought that I would read Joseph Boyden’s, The Orenda.  This novel became the winner of the 2014 Canada Reads contest on CBC radio.  This novel did not disappoint.  It told the stories of Bird (Huron warrior), Snow Falls (an Iroquois girl captured and treated as Bird’s daughter) and Christophe (a Jesuit priest) sent to share his God with the Native people.  The story shares the brutal violence and torture between the Iroquois and Huron, the decimation by the plague and the challenges of living during this time period of fighting between the French and the English.  The Chapters website describes it as “a story of blood and hope, suspicion and trust, hatred and love. A saga nearly four hundred years old, it is at its roots timeless and eternal.”  This is another story that all Canadian’s should read!

Filed under Book Club Pick, Canadian, CBC 100 Novels that Make You Proud to be Canadian, Fiction

Tagged as Joseph Boyden, The Orenda